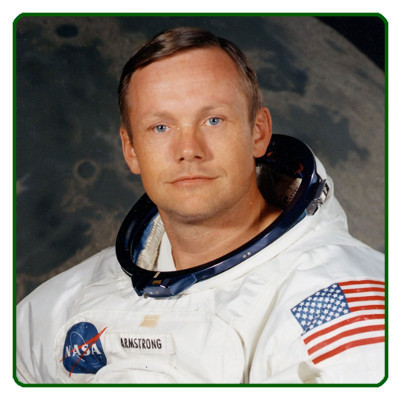 My hero is dead.

Now that some time has passed and everyone has said his piece about the death of Mr. Neil Armstrong on August 25th, 2012, I have had time to process my thoughts on his passing.  In spite of some harsh words I posted back in January of 2011, Mr. Armstrong was my hero.  I suppose it isn’t so much the man that I respected but everything he represented.  I was born too late to enjoy the moonshots as they happened. I was only three years old when mankind first made his mark on the lunar surface.  But, the static excitement of the moment was still arcing in the air in my preteen years. I fully expected that lunar travel would be the norm when I reached my current age.  With Neil’s passing, I acknowledge that my childhood dream will never reach fruition. I’m stuck on planet Earth.

My life at times is marked by interesting coincidences.  This is yet another one of those times. On the weekend prior to Armstrong’s death, I visited a used bookstore. It is a quaint shop to which I go not to find a particular book, but to discover something new.  Among my finds was a book by Dan Simmons called Phases of Gravity. The book centers on a fictional lunar astronaut from the Apollo program. It takes place in the late ’80s—after the Space Shuttle Challenger exploded. I haven’t finished the book, but so far, it seems to be a lament to the loss of the lunar program. It seems a fitting requiem for my hero.

This entry was posted in uncategorized and tagged space. Bookmark the permalink.

4 Responses to Requiem For Neil Armstrong