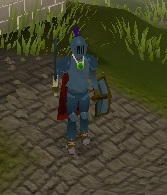 If you don’t know about MMORPGs, you’ve probably been busy with real life.  In a nutshell, they are digital worlds in which thousands (millions for some) of people play simultaneously and there is generally no specific objective. If it sounds boring, you’re wrong.

One of these is called RuneScape. Because it has a rich free play environment, I started playing and got hooked for a very long time. I invested a great deal of time and no small amount of emotion into the character I created. Unfortunately, having my attention diverted to the game nearly destroyed my real-life world. So, I haven’t played seriously for a long time.  Oh, I’ve gotten on and seen what changes the game has taken on.  I’ve done some of the usual tasks for nostalgia’s sake. But, the hours I used to waste on it are done.

But my character lives. 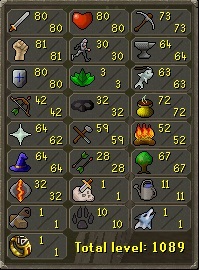 My character has a combat level of 100. You can see the character’s overall stats in the picture. For those of you who are familiar with the game, you will note that some of the member stats have been leveled. That’s because I paid to play for a month. (That was a really bad idea for me.) My character has over five million in gold and, of course, wears full Rune armor. There is better armor to be had for free players now, but I won’t be going after it. I’m not sure if five million in gold is a lot anymore. Jagex, the creator of RuneScape, tends to manage the economy of the game fairly tightly, so I suspect inflation has been kept low. All-in-all the character is fairly advanced and well situated.

It would be nice if there was some way to recoup even a fraction of time lost playing this game. I’ve often thought about selling the rights to the character. One would think that selling it would be my business and mine alone. Unfortunately, it is against the rules. My character can be banned if a sale is transacted and Jagex finds out. It can be banned if I advertise the account for sale. I think that’s stupid. The rule is probably there to maintain balance. Nobody likes to play a game in which real life money trumps in-game effort. Selling characters allows for players to pay someone to level up the character and then jump in when the character gets good. Unfortunately, banning the sale of characters leaves obsessive guys like me with very few options.

I could give the character away I suppose, but then there is no recouping of loss. Also, it has been my experience that gifted resources are not treated with the respect they deserve. It takes a lot to earn what my character has. It should take a lot to acquire it from me. My character should have a good owner that will respect the time and effort that went into creating it.

So, in the end, I’m left with nothing to do but lament my stupidity and remember fondly some of the great achievements and experiences I had in the game. My character, on the other hand simply rests in limbo, reappearing from time-to-time when I feel like jumping in—a ghost haunting familiar grounds.

This entry was posted in uncategorized and tagged gaming, technology. Bookmark the permalink.